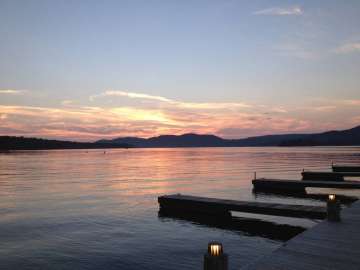 The Fulton Chain of Lakes in the Adirondacks consists of eight lakes located in the communities of Old Forge, Eagle Bay and Inlet, NY.  The lakes in the chain are named numerically.  The Fulton Chain was named after Robert Fulton, the inventor of the steamboat, who envisioned the area as a possible canal route.  The chain begins with a small lake not counted in the series called Old Forge Pond connected to First Lake by a long channel.  In reality, First, Second and Third Lake are one long lake separated by narrow channels.  Visitors love spending the day boating between the villages of Old Forge and Inlet on Fourth Lake – visiting restaurants and beaches in both villages.  Theses lakes offer great swimming in most locations and the waterfront properties here are usually a terrific investment!